PREPARATION
Combine the warm water, yeast and 2 teaspoons sugar in a small bowl. Mix well and set aside to a warm place for about 10 minutes. Combine the 4 cups of flour, 1/2 cup sugar, salt, nutmeg, lemon rind and add warm milk, melted butter, egg yolks and yeast mixture. Beat until smooth. Turn dough out on a lightly floured surface. Knead in enough remaining flour until the dough is no longer sticky. Continue kneading until the dough is smooth and elastic (about 10 minutes). Place the dough in a well-greased bowl. Turn once so greased surface is on top.

Bake for 30 minutes at 350, or until golden brown. Remove the coffee can immediately. Allow the cake to cool. For the glaze, combine the ingredients and beat until smooth. To assemble, drizzle cake with the glaze. Sprinkle with sugar crystals, alternating colors. Cut into the cake and hope you do not get the baby!

OPTIONAL CREAM CHEESE FILLING: A friend asked if there is a cream cheese filling for this. The recipe does not call for filling, but I found a similar recipe that does. So here's what they suggest. Also, it may be worth doubling this part of the recipe:

If filling the cake, cream all the above ingredients together with a mixer and spread onto the rolled-out dough before rolling it into a ring.

Traditions vary, but if you get the baby, it typically means you host the party next year, or at least bring next year's cake. Always a favorite at Mr. Lee's annual Mardi Gras party! ​​ 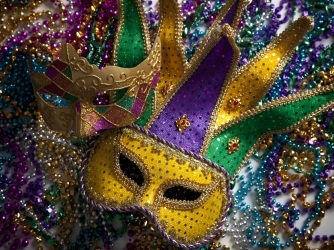 The Mardi Gras season begins on January 6 . On the Christian calendar, the twelfth day after Christmas is known as "Epiphany", "Twelfth Night", or "Kings Day." It is the day the gift-bearing Magi visited the baby Jesus, and is celebrated with its own unique rituals.  While we call this season “Mardi Gras,” the rest of the world calls it “Carnaval.

“Carnaval,” means “feast of meat,” from the Latin word Carne... meaning meat. This is due to the fasting from meat throughout Lent in the early days of the church.

Carnaval continues until Mardi Gras, which is French for "Fat Tuesday.” Mardi Gras falls on the Tuesday before Ash Wednesday and marks the beginning of the 40-day (not counting the 6 Sundays) season of Lent (or 46 days before Easter). During this time of year, one of the most beloved traditions in New Orleans is that of the King Cake.

The New Orleans tradition, begun in the 1870s, borrows heavily from European customs. As part of the celebration of Mardi Gras, it is traditional to bake an oval cake in honor of the three kings - the King Cake. The shape of a King Cake symbolizes the unity of faiths. Each cake is decorated in the traditional MardiGras colors: purple represents justice, green represents faith and gold represents power. A small baby, symbolizing the baby Jesus, is baked into each cake.

In New Orleans, King Cake parties are held throughout the Mardi Gras season. Like the biblical story, the "search for the baby" adds excitement, as each person waits to see in whose slice of cake the baby will be discovered. While custom holds that the person who finds the baby in their slice will be rewarded with good luck, that person is also traditionally responsible for bringing the King Cake to the next party.

The Kings Cake began with the Romans. It was a pagan celebration. The slaves had one and the slave that would receive the object in the cake was granted  freedom for life.

In Spain, they only eat the Kings Cake on Epiphany and the one that gets the toy baby ends up paying for the cake.